Welcome to our blog. Happy reading.

Recruitment Agencies: A Changing of the Guard?

How and why the recruitment agency market has quietly but fundamentally changed in the last eight years.

I was going to start this post with the words: “the recruitment market is changing” but realised that, not only is that a weak, dull, and uninspiring first sentence but, also, it completely misses the point. The market isn’t “changing”. It’s already changed. Yet nobody in recruitment is really talking about it…

We started Hiring Hub way back in 2011 because we felt this shift beginning, and figured it would accelerate, but, admittedly, we were too early. Something was definitely happening – the industry was changing – but the tide had only recently begun to turn and the market was perhaps not ready for a marketplace play.

However, fast forward to 2018 and, well, to say the market has shifted is an understatement. It’s fragmented faster than a glass grenade.

You see, back in 2010 – when we first started talking about building an online marketplace to make it easier for employers to find and work with small, specialist recruitment agencies – there were some 3,855 independent agencies in the UK with fewer than nine employees. Five years later (2015) that number had increased almost threefold to 9,900.

That was a staggering increase in new recruitment agency startups over a five-year period and, what’s more, the trend was still picking up momentum.

2016 saw another 1,400 open their doors, taking the tally of agencies with fewer than nine employees to 11,300 according to the Recruitment and Employment Confederation’s (REC) Trends Survey. 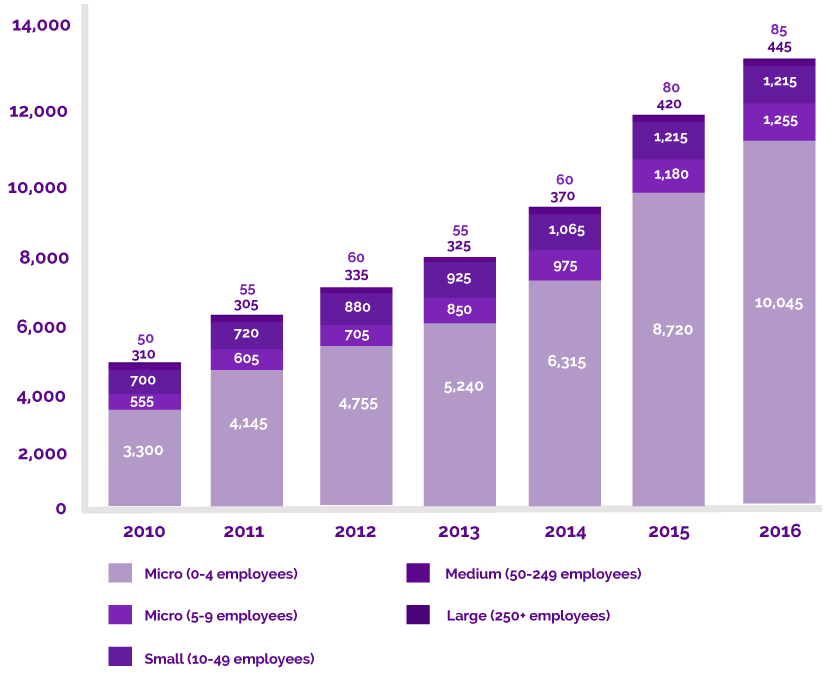 And reports in December 2017 claimed no fewer than 9,001 founders had registered a new recruitment business with Companies House between 1 January 2017 and 30 November 2017, taking the total number of recruitment agencies (of all sizes) currently registered as trading in the UK to 35,725.

So yeah, the market hasn’t just grown in recent years, it’s fragmented beyond recognition. And given it’s a >£35 billion industry here in the UK, it’s strange that no one has really made a big deal of these numbers. But, then, why would they?

I mean, the big PLCs like Michael Page and Hays are either: 1) unaware of the shift and its threat to their business model; 2) burying their collective heads in the sand; 3) too arrogant to accept this dramatic fragmentation will impact them; 4) waiting to see how it plays out before they adapt/react.

In a world of business analysts and data, I can’t see it being ‘1’, and I think ‘2’ would be harsh given the quality of people in the boardrooms at these companies. ‘3’ too, is flippant (apologies). My guess is that most would sit in the fourth camp, carefully watching the industry to see how the change will affect them and how best to react to it. Otherwise they risk becoming the Blockbusters, Woolworths and HMVs of the recruitment world.

Perhaps it’s the speed of change that has caught them out. Less than a decade ago you had a handful of recruitment super-brands like the aforementioned Michael Page and Hays that dominated the market, arguably delivering a commoditised, slow and expensive service that led to agencies being viewed as a necessary evil rather than professional advisors that deliver real, tangible business value.

Beneath these huge, global companies sat a second tier of large, specialist recruitment agencies that often focused (extremely successfully) specifically on sectors like IT, Oil & Gas, Healthcare or Finance. These were generally large SMEs, with a few hundred employees and >£50m revenue. Beneath them there were a thousand or so smaller firms, and that was pretty much it.

Today, though, the market looks totally different. Bearing in mind all of the data above, I estimate that as we begin 2018, there’s now >15,000 independent recruitment agencies with fewer than nine employees. With the majority of those with fewer than four employees and <£250k revenue.

For anyone questioning the impact of these agencies on the overall market it’s worth noting that, according to a presentation published last January by the Staffing Industry Analysts, they now represent over 80% of the supply chain in Great Britain.

Structure of the UK Staffing Market 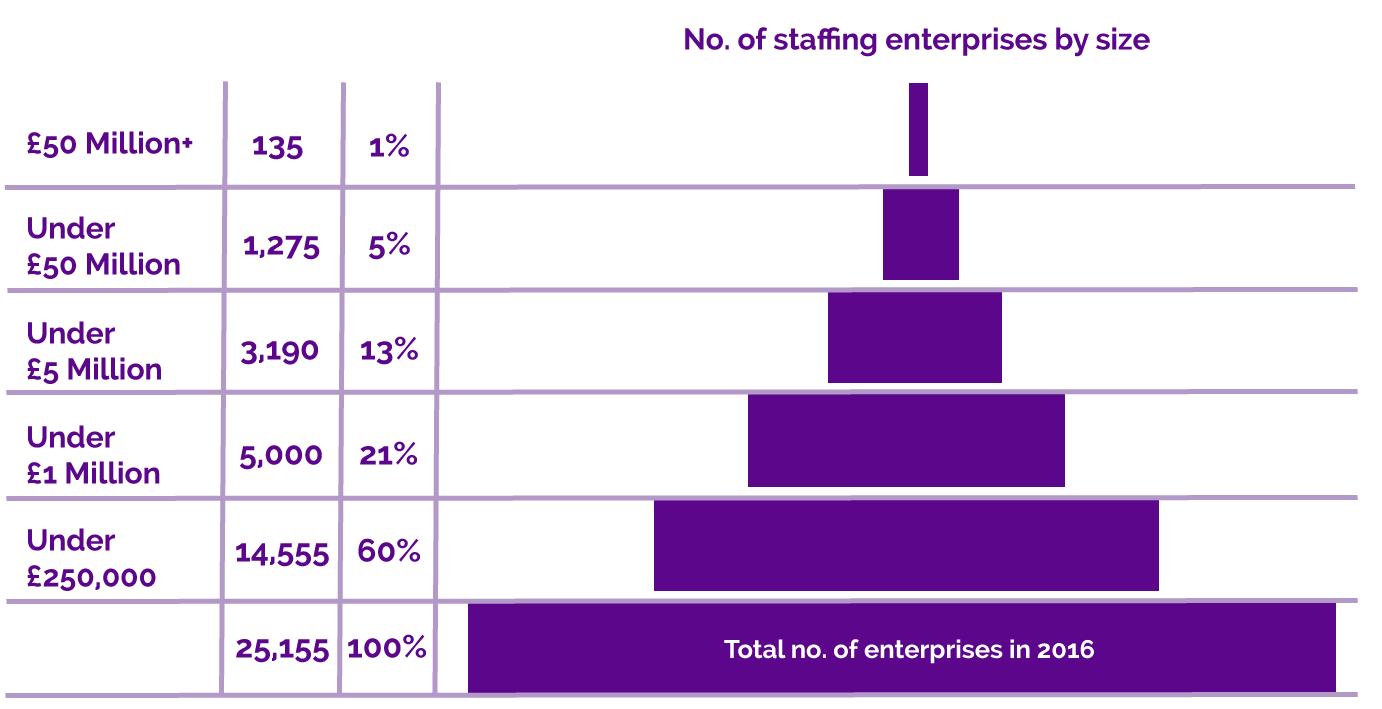 So what’s driving this change? There’s a number of factors: easier communication courtesy of mobile phones, faster and more accessible broadband, and tools like Skype, but I believe the core catalyst was/is LinkedIn.

When it launched in 2002 recruiters viewed LinkedIn suspiciously; a threat to their livelihoods. In contrast, it’s proven to offer an unparalleled opportunity for savvy consultants, giving many the confidence to go it alone.

Think about it. Back in 2002, much of a recruitment agency’s value was in its Rolodex; the candidates on its database. Hence in the ‘90s the big companies – with access to more candidates – dominated the market. As LinkedIn has matured, though, it has diluted the value of those databases because, quite simply, it has the biggest, most valuable candidate database in the world and it gives it away to everyone, for free.

Hence the barrier to entry for new recruitment agency startups has never been lower; you need a laptop, a mobile phone, somewhere to access decent wifi and you’re in business. Those that have worked somewhere like Michael Page for a few years, are decent billers, and believe in themselves can have a go – or join forces with a couple of mates – and, with very little setup costs and with almost no risk, start their own recruitment agency.

Interestingly, most don’t want to create the next Michael Page, they just want to build a solid business, do recruitment better than the way they’ve seen it done at their previous companies (see image below), and make enough money to enjoy their lives, whether that be a fast cars and nice holidays, or moving to a nicer area and putting their kids through private education. A successful lifestyle business can be achieved faster and, arguably, easier within recruitment than in many other sectors.

Thus the growth in new company registrations continues, at pace. And while the market is buoyant, as it has been over the last five years, this rapid acceleration of new agency startups will not stagnate as more would-be entrepreneurs give it a go. Indeed, even in a slow-down or full-on recession, which many predict is coming, those that are good, specialise in a niche and understand their markets, will still be able to thrive and take market share from the big companies.

It’s that core belief, married to our unwavering confidence in the recruitment agency model, that led us to build Hiring Hub in the first place. We concluded:

1. The agency market will get even more fragmented over the next decade
2. Small recruitment agencies are better positioned to deliver a superior service over bigger agencies
3. Employers will need a way to navigate this crowded but valuable supply chain
4. Agencies can find candidates, but would benefit from a consistent supply of vacancies

We wanted to champion independent recruitment agencies, and help employers find and work with them. Building technology to facilitate better connections, communication and relationships, and using data and customer reviews to give small agencies an opportunity to develop their reputations and use their advantages over bigger firms.

We’ve come a long way since we launched our online marketplace in 2011, when there were just a few thousand independent recruiters in the UK, and we’ve learned a hell of a lot too. Now, it really feels like the market is coming with us, and people are beginning to understand the value of a marketplace in helping them to navigate a growing and fragmented supply chain.

So how will this play out? We predict, by 2022, there’ll be over 20,000 independent recruitment agencies in the UK with fewer than nine employees – with the majority of these having fewer than five – representing over 90% of the total recruitment agency supply chain. A group so large that they will be impossible for employers to ignore if they want to find the best candidates.